The seekingGood.blog has endeavored to provide useful information such that readers might expand their understanding of themselves and their overall knowledge as well as to subsequently act in accordance with the “Good” they individually manage to determine. This blog has offered repeated admonishments to “find out for yourself”, to do your own investigations.  Furthermore, while this is a decidedly left-leaning blog, we have also endeavored to encourage open-mindedness, exploration of competing ideas and transcendence of the comforting limits of habitual ways of thinking.  In this light, consider the following. 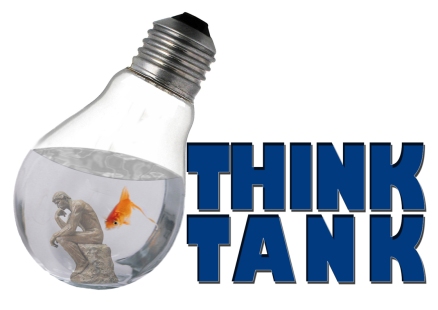 Governments do not think.  People think.  Think tanks represent people thinking collectively.  Governments implement and enforce policies.  Regardless how much thinking individuals do, most will have little direct impact on public policy issues.  Think tanks—collections of thinking people–often help to develop or influence public policies.

Most of us gain knowledge of the world through mainstream mass media.  A news agency might provide information that is novel, focused on relatively ephemeral occurrences, each presenting that agency’s view on current events.  The basis for selecting these events and the means of presenting the “facts” about those events are determined largely by editorial staffs and the corporations that own the media companies reporting on these news stories.  Time and market/advertising constraints (resulting in certain types of bias) often define the “newsworthiness” and manner of presentation of the stories covered. Consequently, the knowledge we gain from mass media sources reflects the limits of the intent and presentation of these media outlets.  As such, we often come away with superficial understandings built on “facts” screened by the financial interests of advertisers and media corporations.

Furthermore, these so-called facts are too often presented out of context, often leading us to erroneous conclusions. To make the situation worse, we each understand news stories against a backdrop of our own understanding of current events.  We too often base these so-called “understanding” of events on slanted or erroneous news reporting coupled with specious social-media notions.  Both through the slanted reporting of news outlets and our own gullibility coupled with a desire to tell ourselves the stories we want to hear, many of us have begun to build erroneous memories  of current events. We then use these distorted views of “reality” as the basis for understanding future events—a problem of which most of us are unaware.

Have you ever considered reading the research findings or following the newsletters or blogs of a think tank? Unlike event-driven mass media coverage, a think tank can provide information about situations, trends, and conditions which naturally form the context out of which the mass media reported “facts” emerge.  In fact, journalists often reference the findings and policy suggestions of think tanks, citing organizations like Brookings or CATO Institutes or the Heritage Foundation, in order to give credibility to news stories.  Gaining knowledge from think tanks can potentially provide more in-depth, broadly applicable, and contextually sound information on a given topic.  By helping to preserve the “truth” in various situations, think tanks can help correct the false narratives we all tend to develop over time.

What specifically do think tanks do?  Andrew Selee of the Woodrow Wilson think tank offers a useful overview.

Think tanks are in the business of promoting ideas.  Their purpose is to evaluate possibilities in terms of what each organization considers the “public good” and to develop pragmatic solutions to public policy.  These policies are subsequently disseminated to governments, civic agencies and/or the general public. Think tanks employ “experts”—scholars, scientists, journalists, policy and technology specialists, and others–to conduct their appointed activities.

Rather than applying expertise across a broad spectrum of topics, most think tanks focus on specific areas of interest such as climate control, tax reform, international relations, economic policies, poverty, democracy/voting issues, healthcare, etc.  If you are interested in a specific topic, you can probably find a think tank to provide a great deal of background information in your area of interest.   Such information can help clarify your own position on your chosen topic, giving you a firm foundation for subsequent opinion, interpretation of so-called “facts” and action.

Why are think tanks important?

Think tanks play the long game, taking the time to ask big questions and develop major policy proposals based on interdisciplinary approaches to issues.  Unlike many mainstream media news sources and similar web-based news outlets, think tanks are not in the business of entertaining you.  They do not resort to sensationalism in order to capture your attention.  In most cases you as a private citizen are not their primary audience (although, that is changing).  The “product” of think tanks is, in most cases, their own credibility.  Unlike “commercial” news agencies, when the credibility of a think tank fails, so does the think tank.

A panel of officials from four major think tanks discuss this question of importance in the video below. (1 hour 14 mins).

John Hamre, President and CEO of the Center for Strategic and International Studies (CSIS), lauds the vast diversity of think tanks, which he sees as representing immeasurable value, particularly in the United States which has more than half the think tanks in the world.  In Hamre’s view, the many varied perspectives and interests of so many think tanks allows us to continually develop new ideas, to come up with new ways of doing things.  Mr. Hamre considers think tanks as vital to our maintaining a perspective on “truth” by their establishing and maintaining a standard of integrity lacking in the general society.  He states, “How will we function as a society when we lose our moorings as to what constitutes legitimacy?  I think this is a very large issue for us to deal with….  In an era when, frankly, so few people read newspapers…47% of Americans say their primary source of news is Facebook….think tanks are going to have to play a very important role in anchoring public debate about what really is true.”

Similarly, Jane Harman, a former U.S. Representative from California and current Director and CEO of the Wilson Center, credits think tanks as providing access to a wide range of diverse perspectives as a means of insuring truth. “News has become an echo chamber….If we can all agree–and this is hard–on a common set of facts it’s much easier to have an informed conversation about what to do. And we’ve lost the agreement on the common set of facts.  In fact a whole bunch of folks don’t even think the facts matter….”

When information is required, where does one turn?  Ms. Harman suggests that think tanks formed the basis of her ability to work effectively within the political arena. She describes her time in congress as “existing on intellectual inventory”.  With her time consumed by governing actions, she had little time to investigate the “truth” forming the context of any given issue. Think tanks provided that “intellectual inventory” on which she and other legislators relied. Referring to the importance of think tanks, she commented, “Having some factual information out there and some highly creative suggestions about policy prescriptions is so useful.”

“Washington is a one industry town.  That one industry is government.  Government has one product. That product is laws.  And laws have one raw material, and that raw material is ideas.  So the question is, where do the legislators, where do all the policy makers get their ideas? Fundamentally, that is why think tanks are going to continue to be absolutely central.”

Think tanks are important because they work to establish genuinely fact-based ideas and creative means of implementing those ideas.  In many areas, think tanks stand as a Great Wall against the waves of so-called alternate facts attempting to consume the public sphere.  Furthermore, think tanks serve as a repository of “event-facts”, that is, history, providing the possibility of verification of life situations.

Facts Beyond the Marketplace

Mainstream media looks to sell descriptions of events in the public sphere.  Think tanks seek to reveal the nature of situations and to advance prescriptions for dealing with those situations.  Think tanks describe what is going on and what we should do about it.  From a newspaper, for instance, you might gain a collection of facts about a given situation – a description of events.  From a think tank, you will more likely gain a description of situations out of which those reported events emerged as well as policy suggestions for dealing with those situations—in other words, prescriptions.

Both the descriptions of situations and the proposed policies regarding those situations are the foundation of the reputations of think tanks.  The “truth” presented by a think tank represents the capital that keeps it alive. Unlike most media outlets, the survival of a think tank depends on its credibility, not its ability to sell its product to the general public.  As the diverse panel in the video above suggests, for think tanks, facts are facts.   While the policy proposals might differs based on the socio-political or economic persuasion of any individual think tank, the facts remain.

Think tanks have become needed assistance in a time of rampant relativism in the public sphere.  Given the political climate of the world and certainly in the United States, even think tanks are subject to a degrees of questionable practice.  However, consider any other store of knowledge and body of action in modern times which maintains a firm grasp on the nature of what has happened (history) and contemporary occurrences.  We most often rely on our own memories to form the basis of understanding what is happening “right now”.  And yet, what do we do when those memories have been so filled with distortions and outright lies that we have no basis for accurately assessing anything?  Where can we turn for the “truth”, for validation of our own memories?  Consider a think tank.

The above post has been in works for some time. As such, the penultimate version is two to three time longer and more in-depth than the current post. Given the rather dry, academic nature of the topic, the full article was shortened to make it slightly more accessible to more people. If you are interested in more information on think tanks, please let us know. We can post more information or send you more of the basic research not presented here.