Previously, we presented the work of Square Roots Grow, an innovative urban farming initiative operating in Brooklyn, New York.  This week, we consider the general field of food-related innovation in the form of “vertical farming” and what might be called “extreme or radical localization”.

Vertical farming means many things to many people.  In the broadest sense, a vertical farm generally seeks to produce crops in a highly efficient, sustainable manner.  Part of that efficiency is to attempt to minimize the horizontal footprint of the plant growing enterprise. Essentially, the goal is to minimize the land and resource use by building upward.  However, how this verticality is achieved varies widely. Some vertical farms use soil; many do not.  Some are outdoors; most are indoors. Some such farms rely on rainwater; most do not.  Dickson Despommier, author of The Vertical Farm: Feeding the World in the 21 Century and famous for his decade-long development of the vertical farming concept, uses phrases suc

h as “inside a building” and “taller than a single story” to describe what he means by a “vertical farm”.  Is the building necessary?  Must the height exceed a single story to qualify as “vertical”?  In fact, what is meant by “vertical”? As you will notice in one of the videos below, apparently there is vertical and then there is…eh…vertical.  All take this term to mean “up & down”, extending from the earth towards the sky, but some include, as does Mr. Despommier, stacked platforms or trays as a means of configuring the plants.  Others propose a more radical view, turning each row of plants on its side as the prescriptive norm for achieving verticality.  Regardless how the plants become “vertical”, these ever evolving farming ideas are definitely not your grandma’s crop patch.

Various organizations such as AeroFarms located in Newark, NJ. have developed industrial-level vertical farming facilities.  Instead of the sun, most of these facilities employ a sophisticated lighting system which reduces the light spectrum to only what is required by plants, thus reducing the resource footprint required for indoor food production.  Instead of soil, plants are grown in cloth made from recycled plastic. Instead of irrigating large fields, AeroFarms in particular uses a root misting system which utilizes 95% less water than comparable traditional farms.

Using a climate control system, the growing cycle is cut in half and crops can be grown year round.

Encouraged by their initial success, AeroFarms has recently built a new, larger plant in a former steel mill. The new plant is expected to produce as much as two million pounds of greens per year.

No longer the novelty they once were, vertical farms have become a worldwide trend.  In addition to AeroFarms, other large scale enterprises are beginning to appear, such as Urban Barns in Canada.

Borrowing specific tech-know-how from NASA, these innovative systems are built to recycle “everything” or at least as much as logistically possible.

So are you ready to get out there and produce some green?  AeroFarms and Urban Barns represent large, corporate organizations, but you and a group of enterprising friends might be interested in something smaller.  If so, you might want to investigate a company called Freight Farms.

Founded in 2010 in Boston, Massachusetts, Freight Farms produces “high-volume production units from recycled freight containers” (much like Square Roots Grow mentioned in a previous posting).   Their goal is to promote “local produce ecosystems”.  Through the sale of what Freight Farms calls  the “Leafy Green Machine” or LGM, they seek to drastically reduce the environmental impact of food production while “empowering any individual, community or organization to sustainably grow fresh produce year-round” regardless of location or climate.

What can you grow in this Leafy Green Machine?  Take a look.

As an individual, you might not be ready to run out and pick up a couple units on your way past the grocery store.  Each unit costs $85,000.  However, as a relatively low-cost business investment this might work quite well for some individuals and especially for small groups or even communities.  (Freight Farms offers more details and pricing information on their website).

Like all ideas, the very notion of vertical farms is not without its critics.  In addition to questions about power use, the ubiquitous economic imbalances likely to channel vertical farm products to so-called “elite” countries and the potentially narrow range of producible crops possible from indoor farming, the potential yield of container-farming has been questioned.  Can a farm housed in a shipping container, really produce as much as a traditional farm?  Well, maybe.  Before you or your group think about investing in your very own shipping container farm, take a look at some serious metrics.  (CAUTION! Math ahead!) 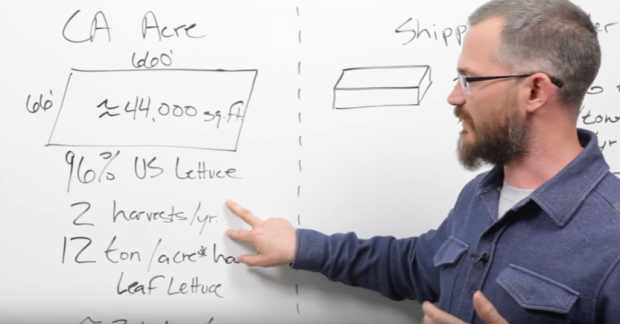 GYO – Grow Your Own

Maybe vertical farms will solve some of our environmental as well as food issues.  But corporate greed has a habit of co-opting much of the innovation that presents so much potential.  In fact, some vertical farming enterprises have accepted funding from both Goldman Sacks and Prudential, for instance.  So if you already see an ominous corporate shadow darkening our green future, how about “radical or extreme localization”? Go GYO!

Vertical “aeroponics” is being successfully used in many different situations, both large and small—sometimes very small.  One true success story is taking place on a small scale—in a 10’x12’ space, in Wisconsin, in a family’s backyard.  There is no large shipping container, no elaborate lighting system and no computerized climate control. Using perseverance, a bit of research, a lot of trial and error and honest hard work, the Staffeldt family has gone GYO.

Benjamin and Sara Staffeldt were growing food in a traditional soil, sun and water system.  The farmland available to them was small.  Furthermore, Wisconsin’s winters proved too severe for any viable greenhouse growing.

They stumbled upon aeroponics as a more practical methodology.  As the video explains, they tried hydroponics first, then, given their small plot of land and the need to grow vertically, they switched to aeroponics—“a faster growing method that used less water”.

Growing chard, basil, lettuce, mint, thyme and other crops, their system runs completely on collected rainwater. “We’re trying different varieties of plants to see how they do,” Benjamin said.  The process was difficult, but paid off in the end.

“By filling the whole greenhouse up, we are going to be able to generate around 495 to 500 head of lettuce and generate us around a thousand dollars in this space.  One unit could easily provide enough food for a family of four to eat year round….Twelve units would generate enough money for a family to really make it worth somebody to stay home and work with the system.”  The Staffeldts sell their produce to local stores; the project has become Sara’s full time job.

So are you ready to take the plunge?  Spawn a little green for the planet?  Come on! You know you want to! What’s that?  You don’t know where to start?  Nope, too late.  MIgardner is about to tell you all you need to know.

Even smaller?  How about a bucket?

Of course, if you would like to grow without the hassle of building, you can always order an aeroponics kit  from an organization like Garden Pool. A great deal of information is waiting for you online—different folks describing both hydroponic and aeroponic food production methods, different designs and various approaches to such projects.  Each varies in both price range and complexity.

With some form of “extreme or radical localization” we can—and probably should—do it on our own.  However, unlike too many so-called “libertarian” ideas, the suggestion here is that we should focus on the welfare of all others as well as our own.  This type of radical localization is based on community and mutual responsibility, not the self-interest that tends to lead to exclusivity. Food production innovations are just one of the ways we can take back our lives. With persistence, we can begin to move from reliance on corporations and those who would see us subservient, or at least dependent.  Such innovations can be one of the cogs in our building a future of declared and realized freedom.

When we get together, anything is possible.

All images of the Staffeldt family endeavor are captures from a video filmed by Art Garden and posted on YouTube by Kirsten Dirksen”.

Take no statement here (nor anywhere else) as factual.  Always consider the source and cross-check with other sources. Continually seekTruth rather than assume it.

No person nor organization depicted in any video nor mentioned in the text above is in any way associated to this blog.