As the first of potentially multiple follow-ups to a previous post about the book On Tyranny by Yale University history professor Timothy Snyder, here is a link to an excerpted interview with Mr. Snyder you might find illuminating. 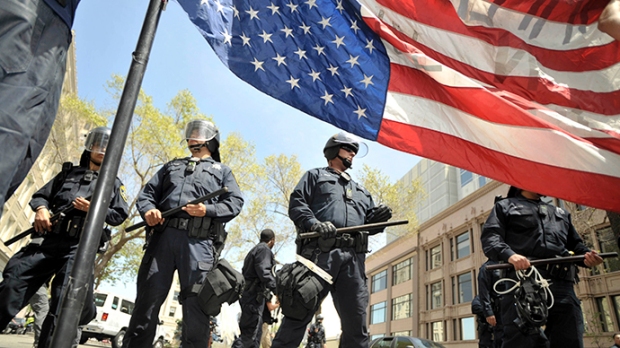 In modern day America, we have largely settled into relative complacency regarding socio-political strife.   We have certainly seen an uptick in street demonstrations since the most recent presidential inaugurant settled into his new White House digs.  However, unless you are of a certain age, you have probably never experienced major violence nor upheaval associated with civil unrest leading to death in the United States.  Many twenty, thirty or even forty somethings are not old enough to know much about and certainly too young to have been present (as were some of us) for events such as the killing of two students at Jackson State in May 1970, the killing of four students at Kent State University (sometimes called the Kent State Massacre which occurred only eleven days prior to the Jackson State killings) or the Watts Riots (also known as the Watts Rebellion) in 1965, when thirty-four people died.  Most people cannot conceive of upheaval of such magnitude.  Perhaps this is partially why Charlottesville was so shocking.

A generation ago, in a time when violence related to American political unrest was rampant, events such as murders (even of children) and the burning of churches was more commonplace than we currently might imagine.  In fact, while over the past have-century, there have been a multitude of incidences falling under the label “civil unrest”, most of us cannot fathom an actual coup d’etat to take place in the United States and the inevitable martial law (with attendant loss of civil liberties) that would inevitably follow.  Such a “lack of decorum” might seem out of place in relatively polite, modern day governmental behavior. Yet as the events of Charlottesville suggested, we in the modern age are not so civilized as to be above the most heinous, most unthinkable acts perpetrated towards one another.

As such, we tend to believe our government very stable, immune to coup d’etat and other such disruptive actions. We arrogantly assign such events only to so-called “third world” countries. As the words “civil war” have become a somewhat popular buzz phrase, we should recall the words of historian Shelby Foote, remarking about the American Civil War:  “We think that we are a wholly superior people.  If we had been anything like as superior as we think we are, we would never have fought that war.”

We have begun to experience a polarization expressed through the sharp rise in hate crimes since the last presidential election, blatant supremacist activity and increasing activity of supremacist counter-demonstrations by groups like Black Lives Matter, Antifa and Black Bloc.  Partisan division has become so severe that a lengthy article posted on Vox in early September hints at the potential death of democracy in the United States. People are priming for a showdown, creating a societal mood which could foster a shocking level of political cataclysm for which we are not fully prepared.  Perhaps even more frightening, beyond potential citizen to citizen strife, there is the dysfunction of Washington, D.C.

We want to believe, ‘it can’t happen here’.  Some believe “it” can.  Timothy Snyder is one of them.  In his case, the “it” refers to a coup d’etat in the United States.  Mr. Snyder has predicted that such an event, in some form, is likely to occur within the next year.  While Professor Snyder’s book On Tyranny is quite interesting, it becomes even more so when you realize the theoretical prediction of political cataclysm that forms the backdrop of Snyder’s thinking.  In an article published in Salon at the beginning of May, Mr. Snyder cites various reasons for his prediction, including: current and future attacks on the judiciary , various present and potential constitutional issues, and a series of predicaments related to violations of the rule of law.  The problem, of course is that these issues present significant difficulties for the current administration—problems which, if they do not somehow magically dissolve, must be dealt with in some fashion if they are to be prevented from toppling the current executive power structure in Washington.  The current administration must find a way to bring itself to a place of “governing independence”, free from the limits and scrutiny of Congress, the judiciary, the press, and the public—a tall order. It is so tall, in fact, that the solution, which Snyder has deemed “inevitable”, might only reside in the executive branch attempting to seize a level of control unprecedented in the United States.

Professor Snyder points to the Reichstag fire in Germany in 1933 which Adolf Hitler used as a “shock event”, a phrase described in activist writer Naomi Klein’s book No Is Not Enough.  Mr. Snyder describes the historic German situation as follows: 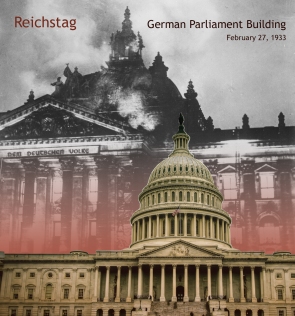 On February 27, 1933 the German Parliament building burned, Adolf Hitler rejoiced, and the Nazi era began. Hitler, who had just been named head of a government that was legally formed after the democratic elections of the previous November, seized the opportunity to change the system. “There will be no mercy now,” he exulted. “Anyone standing in our way will be cut down.”

The next day, at Hitler’s advice and urging, the German president issued a decree “for the protection of the people and the state.” It deprived all German citizens of basic rights such as freedom of expression and assembly and made them subject to “preventative detention” by the police. A week later, the Nazi party, having claimed that the fire was the beginning of a major terror campaign by the Left, won a decisive victory in parliamentary elections. Nazi paramilitaries and the police then began to arrest political enemies and place them in concentration camps. Shortly thereafter, the new parliament passed an “enabling act” that allowed Hitler to rule by decree. (Excerpt from “The Reichstag Warning” by Timothy Snyder, published in The New York Review of Books.

The Reichstag fire shows how quickly a modern republic can be transformed into an authoritarian regime. There is nothing new, to be sure, in the politics of exception. The American Founding Fathers knew that the democracy they were creating was vulnerable to an aspiring tyrant who might seize upon some dramatic event as grounds for the suspension of our rights. As James Madison nicely put it, tyranny arises “on some favorable emergency.” What changed with the Reichstag fire was the use of terrorism as a catalyst for regime change. ~Timothy Snyder

“Civil liberties end when an attack on our safety begins.”
~ Donald J. Trump 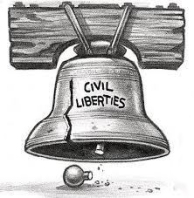 Broadening our focus, beyond the spectacle of Russian meddling in our elections, administrative cabinet shakeups, chants about a divisive wall, and a Loser President who thrives on sensationalist headlines as well as rude, unscripted comments hurled at foreign countries, how much credence should we place on whispers concerning concepts like “deep state” and shadow government?  Perhaps the executive branch attempting to usurp unfettered control of the government is not all we need to worry about. What do common citizens really know about the actual workings of the U.S. government, the CIA, our current political parties, or, for that matter, the media, corporate or otherwise?  Can we actually make “informed” decisions about anything if these crucial elements of societal maintenance are hidden to us?  As we approach the 2018 mid-term elections, how can we justifiably vote for any candidate without understanding, for instance, the covert machinations of that candidate’s party and the counter moves of competing political entities?   What “Good” actions can we enact in a situation in which we are largely ignorant? The fragility of the current presidential administration notwithstanding, what other sources of potential tyranny lurk within the bowls of our government which could instigate a shock event to which we must respond?

Mr. Snyder does not believe the bid for such tyrannical power will be successful in the United States.  If we understand the nature of tyranny and the use of (perhaps state-sponsored) terror to establish such abuse of power, we can be forearmed to resist it. On Tyranny was a reminder that we have the knowledge to avoid and combat attempts at the establishment of tyranny—but we must be vigilant.

In weeks to come, attempting to transcend violence and reactionism, this blog will begin to explore what societal vigilance for Good might look like.

As an addendum, consider this. In the May 1, 1989 edition of the New York Daily News, a wealthy citizen named Donald J. Trump authorized this full-page advertisement. 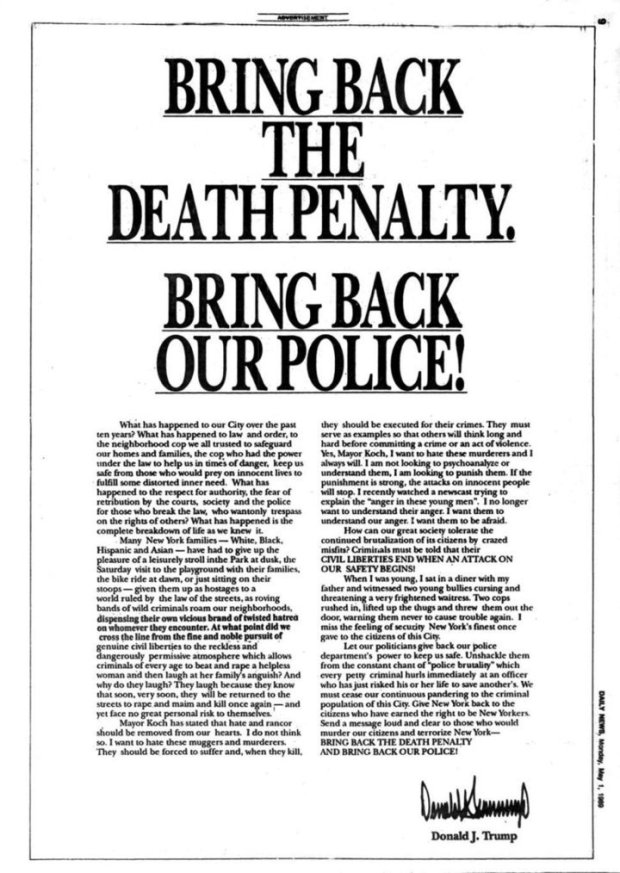 Attitudes die hard.  Still, most of us are not criminals–not yet.  Under the freedom crushing weight of tyranny, things change.