Last week we offered a link to Lee Drutman’s article “We need political parties. But their rabid partisanship could destroy American democracy” on Vox, September 5th, 2017.  This week, in Death of Democracy – Part 2 (an admittedly transitional post for the sake of relative brevity of Part 3) we consider some of the antecedents to the democracy we see melting all around us.

We often think of the United States as a bastion of democracy and democratic rule.  It might surprise you to learn that of all the countries in the world that rule (or profess to rule) democratically, the U.S. ranks below average with regard to its citizens’ opinion of their country’s governance.  This is to say that many people in the U.S. (as opposed to many folks from other nations) feel cheated by the government. These people feel as if they are being ignored, cast aside by politicians who are almost exclusively attending to the needs of corporations and the wealthy.  This accusation is lodged against both major political parties.  Both the mainstream Democratic and Republican parties have become, at least in the minds of many, complete failures with regard to their ability to actually represent the will of the People.  The last presidential election most likely, at least in part, represented a desperate plea on the part of some of us to break the pattern of a seemingly tone-deaf Congress.  However, such dissatisfaction does not suggest that the idea of political parties is at fault–or does it?

You remember the Revolution of 1800, right?  No, not 1776, 1800? No? Not surprising.  It was not so much a revolution as a milestone in democratic governance. The struggle over the role of the federal government relative to individual states has always been a problem for us—the U.S., that is. We ended up fighting a war over it in the 1860’s.  A half century earlier, just a quarter century after the Revolutionary War, we faced the same feds-vs-states dilemma.  During the presidential election of 1800, the Federalist candidate (and incumbent president) John Adams faced some other guy named Thomas Jefferson who strongly favored less intervention by the federal government. Tempers were hot, verbal invectives prevalent and pronounced.  Describing the mood of our nascent country, one politician said “there is scarcely a possibility that we will escape a Civil War.”  And yet, you never heard of the civil war of 1800.  It never happened.

The reasons behind how we managed to avoid a war in the midst of such a tumultuous time are varied, the situation somewhat complicated.  A few of the salient elements involved the two-vote system within the Electoral College as a method of electing the president, initial flaws in the Constitution regarding presidential elections in general (later rectified by the Twelfth Amendment), and internal Federalist disagreements.   Perhaps the famous squabble between Alexander Hamilton and Aaron Burr also played a role, if only a small one.  In short, there are many details involved in the situation for which most of us have little time and less interest. (If you would like a more thorough understanding of the events, take a look here).

The bottom line is that while we needed a strong, centralized government in order to pull the fledgling States toward the common, relatively cohesive nation we were to become, we had to also begin to sort out the independence of states relative to the federal government.  In the election of Thomas Jefferson, the Federalists were defeated, marking a shift in focus for the country.  Additionally, the U.S. began to experience the rudimentary bifurcation that would eventually become our two party system of governance.  However, the point is not that this happened.  Of greatest significance—and why this was revolutionary—is how it happened.

The Federalists were in control of the U.S. government, and then they were not.   A ruling body of ideas steered the country and then a new set of ideas took control.  There was no war, no bloodshed, and no armed conflict as most likely would have happened in other countries at other times in history.  This situation was resolved diplomatically. A government was actually voted into being without an armed conflict.  We came together and got it right (or at least as right as it could be at the time).   In the Revolution of 1800, we established a way of being together politically as a country.   The shift was accomplished legally, through duly elected representatives who (theoretically) spoke for the people, without violence.  Democracy (as it was then understood) won the day.

Fast forward to the present.  Again we find ourselves in an apparent partisan struggle. Again, the phrase “civil war” is spoken–sometimes only as whispered speculation, sometimes in defiance.  However, in modern day America, unlike the 1860’s, we do not have the luxury of geographic borders reinforced by clearly defined boundaries of differing economic systems (slave-based agrarian Southern states vs industrial Northern states).  We no longer possess a clearly defined subjugation class (slaves) to use as the currency of disagreement.  Now, we represent an amalgam of colors, faiths, and orientations.  (Most of us actually fall into the subjugation class whether we know it or not.  We simply have not yet found the solidarity to address the subjugators with adequate numbers and methods).

Some might balk at the idea that this so-called revolution of 1800 was a good thing.  One of the results of this event was that, for the first time, the idea of using specific political parties as a basis for elections became a consideration. Instead of choosing sides, taking up arms and killing each other to resolve our differences, we pooled our interests, forming separate governance coalitions bound by a tentative  agreement around common goals the country was to pursue.   The presidential election of 1800 marked the beginning of what could (and should) have been a good thing.

In his fair well address given in 1796, George Washington voiced his apprehensions about the formation of political parties, stating:

To the efficacy and permanency of your Union, a government for the whole is indispensable. No alliance, however strict, between the parts can be an adequate substitute; they must inevitably experience the infractions and interruptions which all alliances in all times have experienced…. They serve to organize faction, to give it an artificial and extraordinary force; to put, in the place of the delegated will of the nation the will of a party, often a small but artful and enterprising minority of the community; and, according to the alternate triumphs of different parties, to make the public administration the mirror of the ill-concerted and incongruous projects of faction, rather than the organ of consistent and wholesome plans digested by common counsels and modified by mutual interests…. They are likely, in the course of time and things, to become potent engines, by which cunning, ambitious, and unprincipled men will be enabled to subvert the power of the people and to usurp for themselves the reins of government, destroying afterwards the very engines which have lifted them to unjust dominion.” ~ George Washington, 1796

Washington feared the formation of political parties for several reasons.  He thought if parties were to exist, they should never align with “geographical discriminations” such as states or districts since the populace living within such regions are never so politically homogeneous.  He believed that the inherent despotic nature of political parties would eventually lead …

…to a more formal and permanent despotism. The disorders and miseries which result gradually incline the minds of men to seek security and repose in the absolute power of an individual; and sooner or later the chief of some prevailing faction, more able or more fortunate than his competitors, turns this disposition to the purposes of his own elevation, on the ruins of public liberty.

Washington predicted that the institutionalized divisions that political parties represent would eventually lead to intractability—perhaps exactly what we are seeing played out in Washington, D.C. in the 21st century.  The Drutman article referenced above spells out in detail the many difficulties associated with the partisanship which should provide for a useful mechanic for governance.  Instead of rallying around a true democratic principle to bind us together, as our first president predicted, we have come to use the apparent differences between us as a means of remaining separated from one another. 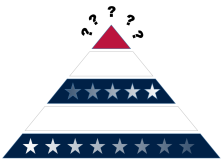 How can we possibly govern ourselves when we are not only staunchly divided but when we generally have no interest in compromise?  From the founding of the country, our motto has been rule for and by the People–well, some of us people anyway (excluding people of color, women, non-landowners, and…yeah, there were a lot of folks left out).  The general idea was a good one, though.  Unfortunately from the beginning we have operated on the basis of a paradigmatic hierarchy which guarantees exclusion of one kind or another.  This penchant for exclusivity has settled into our most basic cognitive, attitudinal and behavioral patterns. In this current time of such pervasive uncertainty, the destructive nature of these paradigms of separation, in too many instances, have settled into rigid manifestations of crude and potentially violent tribalism.

On October 6th, a conference organized by the research group Bright Line Watch brought together twenty top political scientists (including Timothy Snyder, author of On Tyranny previously mentioned here).  The topic was American democracy. The general consensus was bleak, the prognosis essentially that given current trends, in two to three decades, American democracy will no longer exist. (If an understanding of the depths of our plight is of interest to you, be sure to check out the Vox coverage of this conference.)

While the sentiment at the conference was remarkable negative, perhaps to those who doubt the fragility our current political state, consider these findings:

“… many Americans are open to “alternatives” to democracy. In 1995, for example, one in 16 Americans supported Army rule; in 2014, that number increased to one in six. According to another survey cited at the conference, 18 percent of Americans think a military-led government is a ‘fairly good’ idea.” (see Amanda Taub’s Nov. 2016 article “How stable are democracies“).

How then can we, the People—if indeed we can use such an inclusive phrase any longer—extricate ourselves from this socio-political quagmire in which we find ourselves?  We first must explore the nature of our divisions and the persistent tendency to continually separate ourselves from one another.

In Death of Democracy – Part 3, we will take a peek down the rabbit hole, into the roots of our tribalism and our actual desire to remain “over against”.