The first posting on this site appeared one year ago.  The blog arose out of a desire to focus the thoughts and actions of a group of social scientists, artists, educators and others around the general topic “what is happening to the United States and what should we do about it”.  We began 2017 largely with small reposts of articles and videos that seemed noteworthy without appearing overly partisan.  As the months passed and the vagaries of WordPress formatting presented less of an impediment, the posts began to change, dramatically increasing in length, complexity and containing significantly more original content.

The reset for this New Year (2018) will initially return to more “light” fare until the major stories for the year emerge (just as net neutrality and democracy became the major themes of 2017).  The blog’s intention, however, is to shift focus from external or civic (socio-political) events to more internal psycho-social states we each experience as individuals.

On the political spectrum, one reader described this site as “radically centrist” while another completely rejected such a characterization, suggesting instead that the content on this site presents “parallels” to the notion of left and right (i.e., off the scale entirely). In fact, while at times, we have presented a perspective some might call left of center or even, at other times, beyond the left pole, we have made no attempt at self-categorization, believing such labels as “Republican, Democrat, liberal, conservative, etc., etc.” to represent little more than crude caricatures that obscure rather than inform.

From this blog, you have not nor will you read any sympathy for the U.S. government (as in “my country, right or wrong”), regardless who was or is president nor what political party dominates Congress. From this blog, you have not nor will you experience ravings about a so-called “deep state” (even if such an amorphous cabal probably does exist in some form), nor will you encounter gossip associated with obscurant, sensationalist gossip about the person often sitting in the President’s chair.  On the other hand, you might encounter severe skepticism regarding what we individually and collectively think about the world.  What most of us know of the world and the basis on which we form our opinions and subsequent actions largely comes to us through some form of news media. As such, this blog will, with a jaundiced eye, gaze hard at news sources and their presentations relative to some notion of “truth” and objectivity. Through such observation, we will seek to identify how various media sources contribute to blurring “truth” in the public sphere. Additionally, we will continue to challenge behaviors within the U.S. government which appear to ignore the premise that the government should be both of and for The People.

The Winds of Utopia 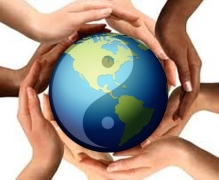 Regarding “who we are”, we will continue to explore this admittedly idealistic notion “We, the People” in an attempt to ferret out just how unrealistic an ideal this phrase might be relative to the too frequent narcissism in which we as individuals wrap ourselves.  You, the reader, will most likely grow tired of reading admonitions to care for one another.  Yet the dream of We, the People can only become a reality when we strive to insure that ALL of us are safe and as content as we can be in the world as it is.  Such encouragement arises from a strong belief that if the world is broken, it is because we have failed in our personal and collective responsibility to attend to each others needs. We have failed to identify and both chastise and curb the actions of those forces and individuals who seek to exploit the world, “braking” it in the process. If we are dissatisfied with the world, we each bear the responsibility of expressing such discontent both on a “civic”, that is, through the outward, socio-political action in the public sphere as well as personally within each of our individual spheres of influence.  Behaving in this manner, we mutually benefit.  In short, we need to exercise diligence in creatively caring for one another as we care for ourselves.  Expressing accountability toward each other we thus establish the basis of a mutually shared governance.

Through specific content, this blog will begin to explore more profound questions, challenging each of us through questions such as:

Rules of the Game

Finally, the basic rule by which we as a site attempt to both operate and advocate is the golden one—that every person should enjoy the benefits we as individuals seek for ourselves and each should be protected in the manner in which we each ourselves seek to be protected. In short, we should behave toward others in the manner in which we would like them to behave toward us.  On a political level, actions of this kind sometimes require sacrifice.   Too often, we are willing to allow others to bear our pain. Given our collective propensity to scapegoat, we too often rely on villains of one sort or another to ameliorate the fear and self-recrimination we too often feel (and attempt to avoid). However, together, we can make this world work for everyone—at least that is the goal toward which we all should strive. If there are enough of us seeking such an experience of life, perhaps we can manage to pull others—if only kicking and screaming–into a future of this exulted hue. The winds of utopia blow sweetest on those who embrace possibility.