“Like it or not, people will have to acquire their own news to a certain extent and must therefore learn journalistic techniques and various tricks of the trade”
~Bruce Bartlett

In the current era of “fake news” and a general mood of “alternate fact” inaccuracies and slights of hand, many of us who truly seek the positive in life—“Good” and “Truth”, for instance—we sometimes can feel overwhelmed by a lack of reliable sources of information about the world.  Bruce Bartlett has written a book—The Truth Matters–to partially address this situation. 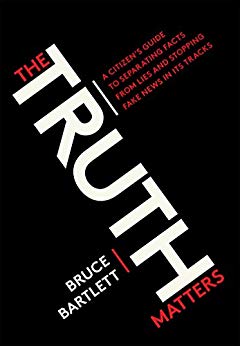 The Truth Matters is not a philosophical treatise.  Rather, Mr. Bartlett offers a primer on getting accurate information about the world. In his own words, the book focuses on “actionable tips and tricks for reading critically, judging sources, using fact-checking sites, avoiding bias and identifying experts”.

The book is small, literally, measuring only 4×6 inches. Its mere 120 plus pages are divided into fifteen to-the-point chapters.  Each chapter begins with a convenient bullet list of “key points” which succinctly summarize the chapter’s contents.  As such, the book represents an easy access reference that finds a natural home on the shelf next to your dictionary, thesaurus and manual of style.

The tone of the book does not betray Mr. Bartlett’s political persuasion—which, of course, is a good thing.  Truth is—or should be—Truth.  Only the self-deluding believe the “left” and “right” monikers actually present “truth” rather than mere perspectives about reality.

Mr. Bartlett covers a wide range of topics, including:

As a former presidential adviser to Ronald Reagan and a slightly right of center economic theorist, one might assume that Mr. Bartlett brings a more right leaning orientation to his writing. Perhaps such is true elsewhere, but not in this instance.  Furthermore, in the name of balance, beginning with the post about David Frum’s new book Trumpocracy, the seekingGood blog is attempting to broaden its reference base to include somewhat more conservative authors and commentators (somewhat balancing Chomsky, West, Hedges and others). However, The Truth Matters represents a sound reference from which we can all benefit.

As background regarding the author’s political orientation, you might also want to read Mr. Bartlett’s article “Why I’m Not a Democrat” which appeared in the June 2017 issue of the Moyers Journal.